I was brought up in the hills of North Yorkshire. Based in Bristol for 25 years and having surfed in Cornwall and Devon I was looking for the hills in Exmoor, but one trip to the Black Mountains I realised they weren’t hills at all, just beautiful bumps on a downy devon duvet.

I don’t believe in god or ghosts, or the movement of stars but there is something about the mountains… even if it’s just within the perimeters of my skull.

We found a tiny one up one down cottage with a lean-to studio and a really big garden. I fell in love. On closer inspection however, it had fallen out of love with the land it lay on. It had feet of clay. The clay bed it perched it’s stone on was slipping down the rock of Vowchurch Common. We could have secured roots to the stone and tried to stop the land slipping but we ‘didn’t have that sort of money’.

So instead we went on a 6-month adventure to Barcelona and came back to Autumn in the UK. In Barcelona we had spring early and autumn late, we had swimming in the sea and dancing and roller blading along the beach, but it turns out I am hefted to the UK. 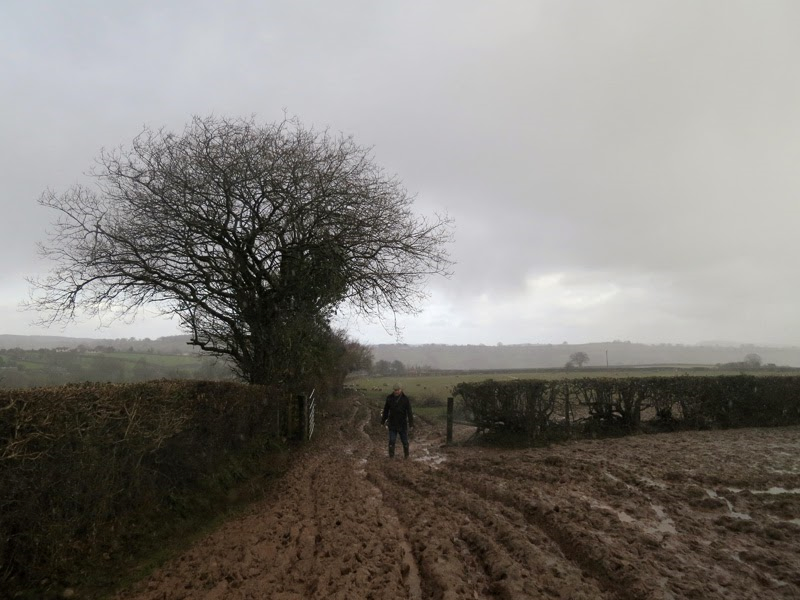 So, within weeks of our return to Bristol we were looking at a rental property above Longtown. It was a day of damp rain and low cloud. She said come back when you can at least see the mountain. It’s brilliant we said, we will take it. We had months of mud and I fell so deeply in love that by the time spring came up through the ground I thought I was going to burst with the beauty of it all.

They needed to sell it.

My father said on his death bed ‘don’t buy that big place’.

And we ‘didn’t have that sort of money’ anyway.

We had looked about south east, east and north east of the black mountains, our tether to Bristol and work being still strong it didn’t seem to allow us straight over the hill.

So, we looked at one place over the other side of the hill and it is now home. It has a tiny garden and a small shed to work in which Graham and I fought over until we found the Chapel on Newport Street.

It was Molly dog who introduced us. We were walking up the road with the cottage particulars, we only ever really needed to see the outside of a place to make a decision as it was which way it was facing that mattered. Molly said hello to Diva dog, so we said hello to Diva’s owner Sue. Turns out she was a sculptor herself and knew my work, turns out her husband Tim was one of our best friend’s Uncle, turns out we have landed in the best place to live in the world with the nicest neighbours you could ask for.

Oh, and then there is this funny unique Hay place. Well that’s a rather superb bonus!

I went and got myself lost.

I was swinging away merrily on my trapeze, I could do all sorts of tricks hanging from my strong tree with a sturdy branch for me. Apart from a temporary perch in London and Barcelona that tree had been home for 25 years.

Then a plan is hatched…exciting.
Love a plan.
Love a life plan.
Exciting.
Ok.

Pack up my still life tableaux’s, my shelves, my studio, my identity. Rip the images from the walls, rip down the walls and floors of our home, our handcrafted work live, (also on a shelf) Put them all into a skip.

Place the salvaged remains in boxes labelled with marker pen, ‘open now’ or ‘archive’. Put all the most precious memories of tiny bits into the wrong type of box so it smashes and spills your life over the inside of the hire van.

Let go of the trapeze.

Carol let go of the trapeze.

Can’t really see the trapeze the other side by the way?

Most of my life goes into storage. Move into my new space, a chapel, a different architect, a different sensibility, still cant see the other trapeze by the way? Deadlines don’t move so work surrounded by mess and boxes with no time for gravity.

Then this morning I think about the labels for my show, my upcoming solo show… in my new tree. The one I was SO excited about. The tree that I wrote all those things in. The tree where I made those paintings and sculptures.

I see that I was in fact here all the time.

There are strong trees in Llanigon and London. And I also see its not necessarily the tree that has to be strong.

We live on the edge of a valley, each night the theatre unfolds its play of light as the shadows lengthen, the light on our side of the valley is fluorescent deep yellow, the suns warmth highlighted in tall grass heads against the dark shadow of deep greens and further blues of the black mountain beyond.

The mouth of the Olchon Valley is right of stage with its depths in light blues. A field of wrestles sheep make a racket and lighten up the left hand side with noise that is echoed occasionally with geese centre stage. Our sheep usually make near munching noises but tonight they are further down the field. Nigel has been bringing the tractor round to collect the willow trunks so their top pitch is unsettled.

At 5 to 9 the deep yellow light of the evening has gone under heavy blue black clouds that cuddle hay bluff and the drama subsides. My damp trying to get up the hill puffing tea shirt clings coldly now and its time to go in. But the peewit and the sheep calling keep me out on the side of this cup of magic.

The valley has a lump among its middle that we walk over to get to the shop, each side with its own stream, the River Monnow and Escely Brook, leads us down to the string of white houses that huddle sometimes two deep against the road. There we chatter in the shop over bread and cake buying and then to the pub for Butty Bach.

The borders have many beautiful valleys but there is a distance and a nearness to the drama in this one, we have walked most of it, all fields are recognisable, all the different lumps traversed or mused on as the light changed through the day. Soon the bats will be replacing the swallows and swifts and soon we will be gone from here.

Something always to remember is to leave time for space.

In Barcelona I painted this painting

“A moment caught between the noise. I see my ‘Family Tree’ painting and realise its not a family tree at all its just about parents and me. The orange pair of leaves is them, as strong and intense in colour as the land. But I am a leaf. They are leaves.”

And leaves have their time and then they are returned to the earth. 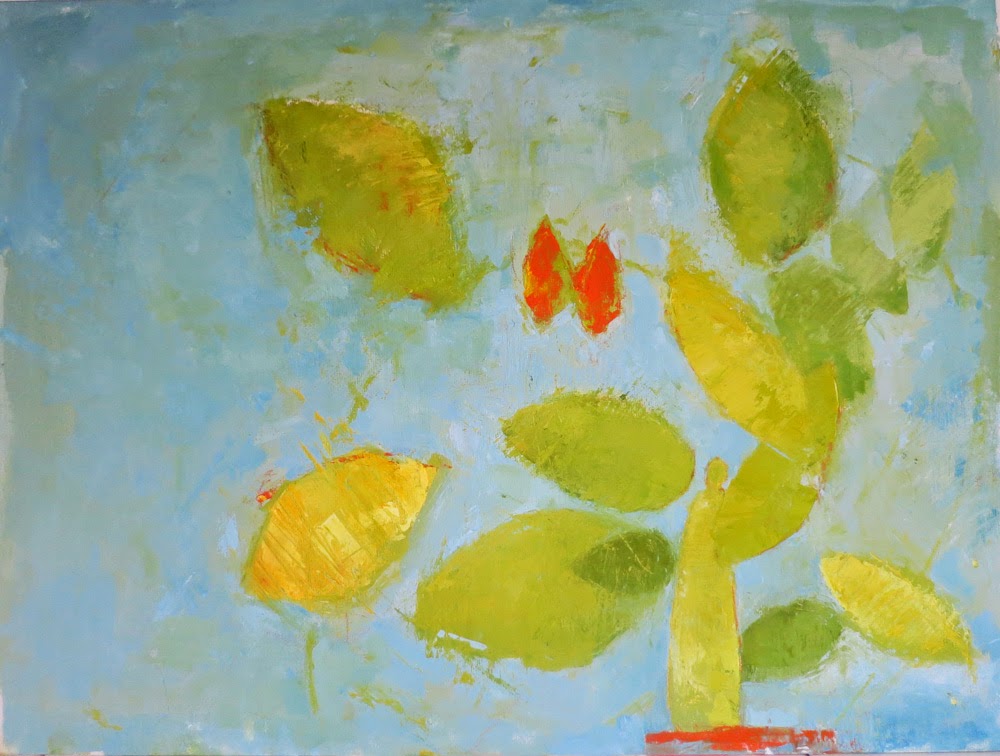