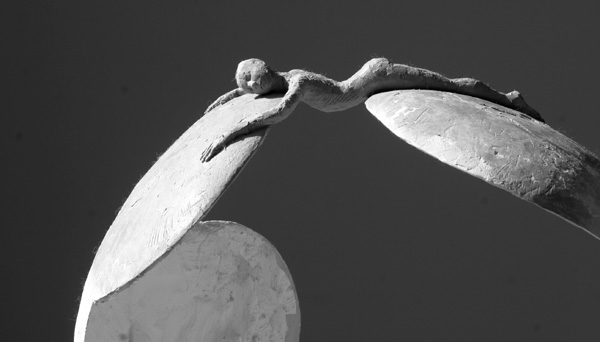 For a slide show you can go here.

An essay about the show

Red Leather JacketIn a recent interview Edwin Heathcote described Zaha Hadid as having ‘…a kind of facade that she had to put on to be forceful enough to get her work built…in a way, she developed this crust, which got more solid and thicker’ as her career progressed.

Every few years the theme of armour comes into my work. It manifested itself when I was living in London, years ago. Lonely, battered by my own doings, I had wanted to buy a red leather jacket. I didn’t, as it seemed too silly, or too expensive or something. But later that day, when someone bumped into me and spilt my tears, I realized I did need it. My red leather, my armour. 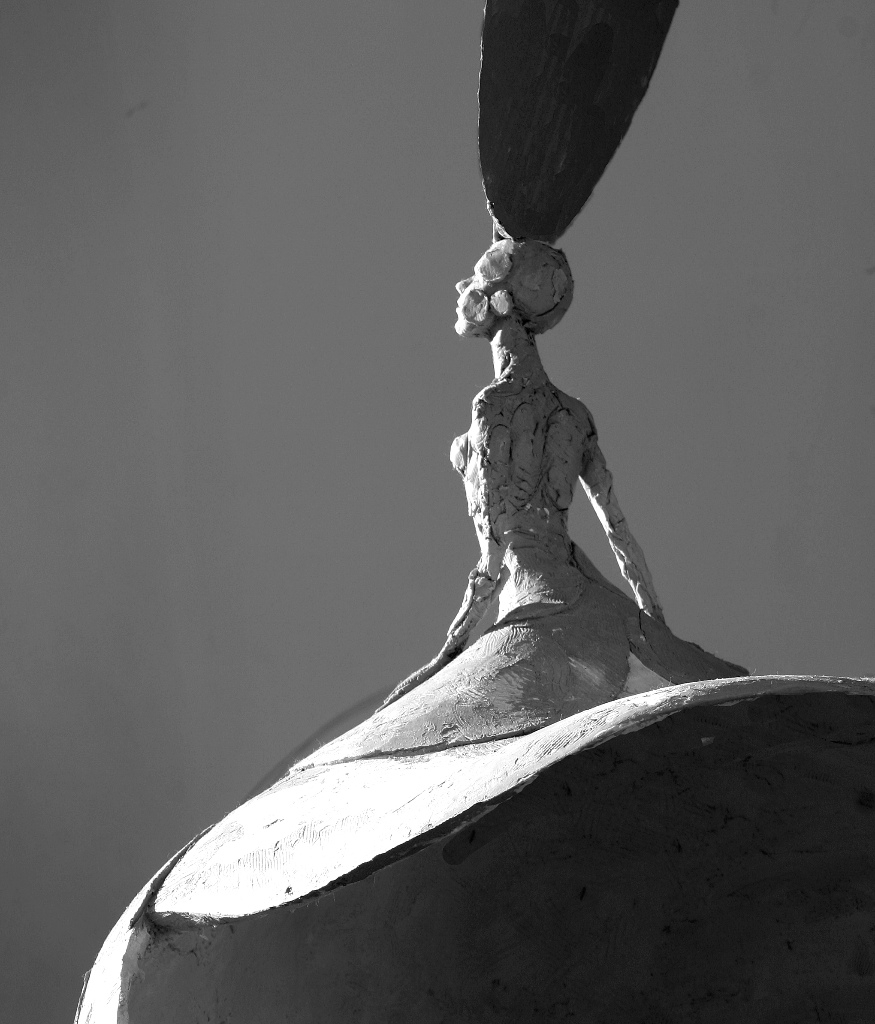 Years later I made Armour Girl and then Personal Army. The armour reappears now in Petal. Older and not so self consumed the protective crust belongs to nature. And maybe for her, not for me, she will be red.

Today I see in an old film of my work and (although I cringe at listening ) I see that red has been a constant visitor. It’s underneath the gold in Armour Girl, figures loom out of it in 8 x 4 ft canvases but never has it been allowed to settle in sculpture. Its like I am frightened of this strange guest.In Barcelona I pretended that I was playing with colour, as a ‘practicing’ artist I used the word ‘play’ to try and trick myself into an exploration not a definitive end. Despite the deception, colour made me feel strange, it’s power on the gut. A peach became a receptacle, it was ‘cut’ and was ‘bleeding colour’. I went there, into the ‘squelchy flesh’ of colours, bruised, ‘dented through white cloudy bloom, deep purple’ …. and then I ran away.

In my blog I describe flamenco like how I felt too adrift to make paintings, to use colour; quickly I find a get out and blame it on the location. ‘I am adrift when I am painting; in Barcelona I am just too much adrift already…too far from the shore for me to feel ok’. And the drama continues ‘I had put so much pressure on myself to be Rembrandt in a few days and I only had this one chance here to do it, now. It was wearing me out. Like Chesil beach with its slippery pebbles…half drowning in shallow water.’

I enjoy form immensely; the swell of a line, the movement,  the drawing in the clay, the drawing of the varied bodies of folk that model at life classes. I draw, a lot. To get myself up to speed. To see. But one drawing seems to be the stem of a lot of the work ‘in cuitadela park, the people had the same shapes as the leaves behind and disappeared into them’. The drawings then became impossible sculpture paintings like Family Tree.

So the colour I played with in Barcelona, through form, did seep in. ‘Like strong red tea in clear hot water, a puncture of the hot surface and in, the colour seeps, curls, drifts, creeps round the glass and finally disperses changing the liquid completely, into something delicious.’

This week I am painting some of the new pieces. My still life seemed so disjointed with my sculpture but slowly now they seem to be making sense. The hollow forms of Petal echo shapes in the paintings of flowers, the Loquats nestle together on the plate like a couple, their orange skin leaps onto the figure inLeaves. The apples in Eve remind me of the still life paintings I lust after. 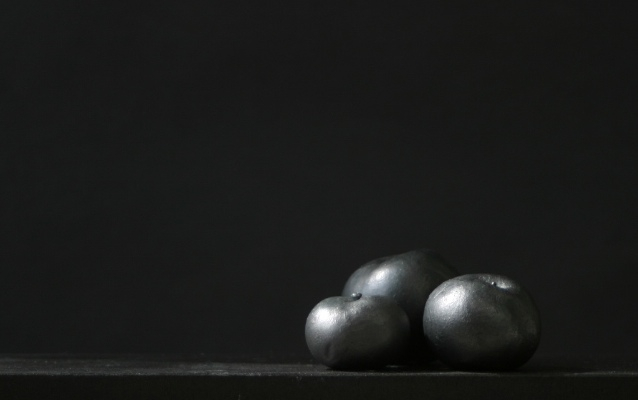 In form there is a safety, a freedom to take risks, ‘with my sculpture my raft is large, I can enjoy the turbulence, lie back in the sun and feel the movement beneath, not care if I go into deep water, just think its funny and exciting.’  Its what 24 years of making does to you, there’s a comfort, a confidence in the history that enables you to push on into the new, to run so fast you can’t sleep from the excitement of it all. 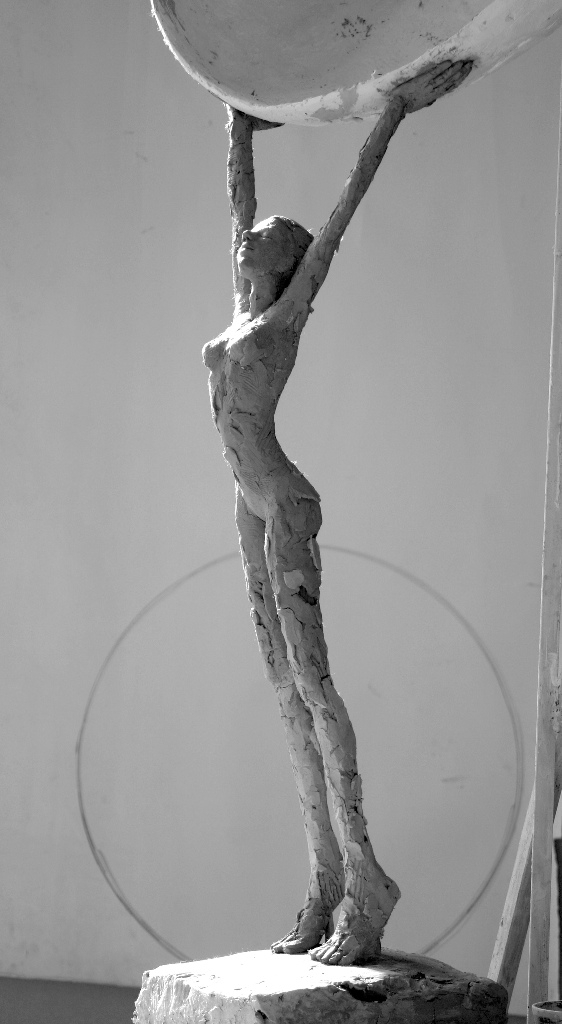 A flurry of new techniques percolated every part of the studio with nasty plaster dust. But history has a habit of circulating up through time, invisible lines reach far back and far forward.  While making Red Scarf  I see an old friend and so ‘Carpe Diem‘ comes along too.

The new plaster forms seem to have a life of their own and change shape with a speed of a drawing. While making Leaves I see an abstract sculpture I made in my second year at college, it amuses me but also gives me strength as I run down hill, I do so on historically strong legs. And in my sketchbook I speak as if I am the sculpture and at the end of a long monologue, who’s excited insanity I will spare you, I say ‘What fun this is!’As I watch the gulls out of the window, I realise the studio has been an influence. Breeding from the glut of our mess, oblivious to reproach they glide and scream and soar over the valley of low tide and wash white bodies and grey wings on its muddy banks.  The blues and greys of flight will appear in Plain Girl. 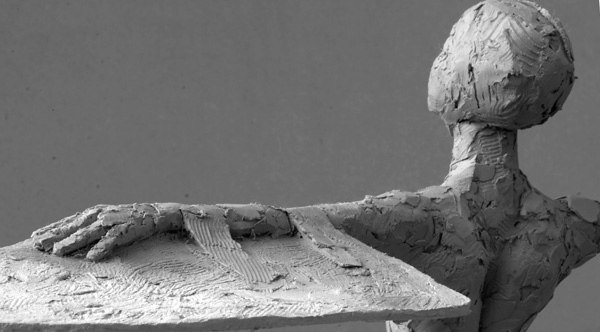 The bright colours from Barcelona sit with the reds and lime greens of the our new found, much loved Wales, who’s high mountains I feel strangely hefted to, its a peace that seems more than just a lovely walk in fresh air; as if the the moss and rocks are a receptacle to the becks of home.  Distant relations of Grandpa’s sheep, another line in history, come to our window here, the lambs are inquisitive but with a noise from mother they run back. Nothing comes from nothing and everything comes from nature. Sculptures below Heft and Flock: 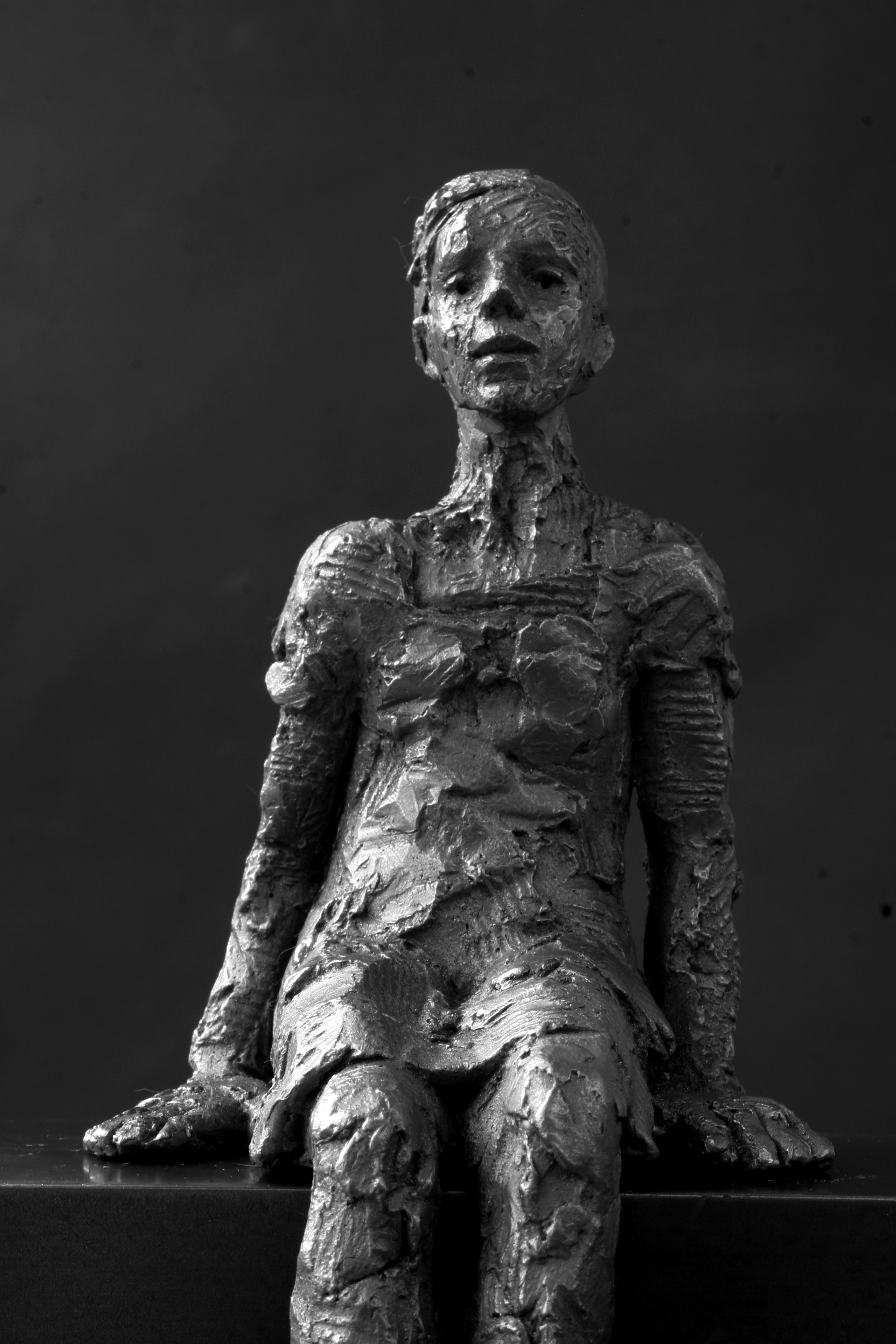 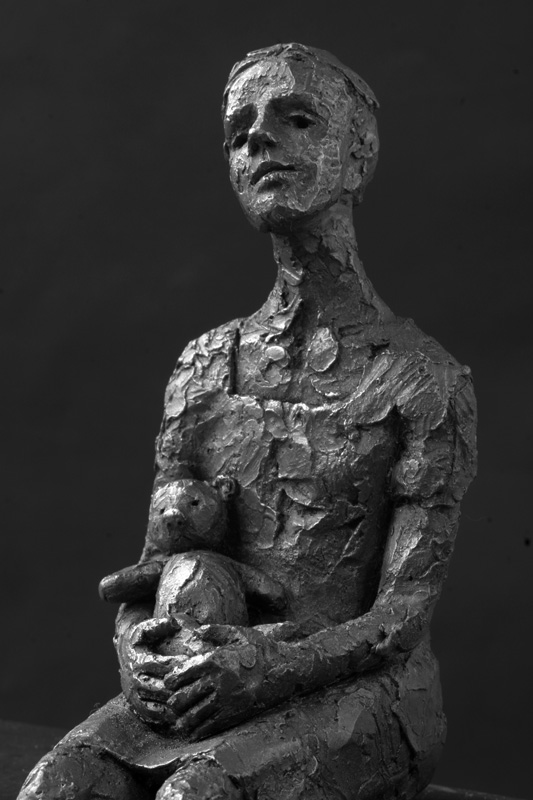 Doing this new work has given me such courage. If I can believe a little in myself  I don’t need my red leather jacket. I hope that I can show some cojonas and the colour will be there by the 12th May.Preview 12th May 2016

Slide show from my solo show at the Woolff Gallery, London in 2016

For an essay and more details about the show, click here.

For me this dialogue between words and sculpture started many years ago with a poets visit to my open studio. John Terry wrote a few poems including ‘Listen’ that made me look again, the figure had a new story, a new life.
Sculpture can be like this. Maybe its just a suggestion to a thought, a step, a bridge to another story, I have my ideas but like chinese whispers the message is often reformed through other eyes.

Words are like this also, I listen to poetry or the prose in a song and it ignites something in me and I respond. Docket is in response to a Caitlin Rose song. The piece Man with Mouth Open is in response to the famous poem by Stevie Smith*. There was something in their words that resonated with me so I responded, I moved on the story.
I too like to play with words and I write terrible poetry but I don’t mind, its just when I can’t describe it in clay I use words, as Joan Miró said “I am neither a printmaker or a painter but someone who tries to express himself with all available means”.

This competition is about that freedom. Its about enjoying words no matter the skill level, I can’t spell and my grammar is shocking but I look and I see, and like an observational drawing I react to whats in front of me. Imagination is left for sculpture but my writing is like drawing, when you start looking you see more.

I do try to make my words good, it is not about not trying, but it is about not being afraid to start, its about the freedom to express ourselves, without a bit of confidence and a bit of freedom we can not start to be the best we can be. As John Terry said about my work back in 2006 “They are first of all, real people. They yearn but they also give. They rise, they don’t fall. They strive; are eternal optimists. They look perhaps slightly disorientated, but there is no pleasure in falling, or in giving up, so they keep on. ‘For us there is only the trying’ “

Competition Details
Write a piece of poetry or prose in response to a sculpture or group of sculptures at Carol’s Open Studio 6 – 16th November 2104
Or if you are not local to Bristol or find it difficult to get to the show then use these four sculptures for inspiration.
Love, Standing in the Wind, Personal Balloon and May
Prizes
The prize is, of course, firstly the completion of your own poem, and secondly the winner of each of the three categories will receive a sculpture made to celebrate The Reading Agency.
Categories
Most loved poem any age by online voting system
Under 18
Under 12
Age limit – Under 18 – submit online with an optional donation to The Reading Agency
Closing Date – 30th November
Voting online and judging 1st – 14th December
Winners announced – 15th December
Judges
To be announced
The sculpture – made to celebrate The Reading Agency will be similar to the pictures below and 20% of all sales will go to The Reading Agency throughout the Open Studio event either online or at the show. 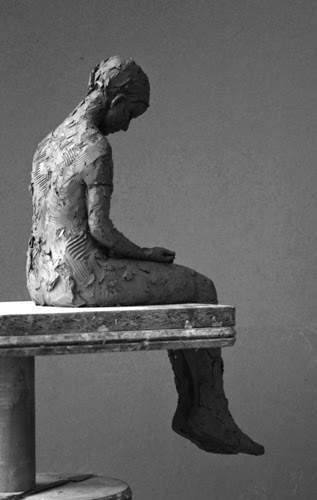 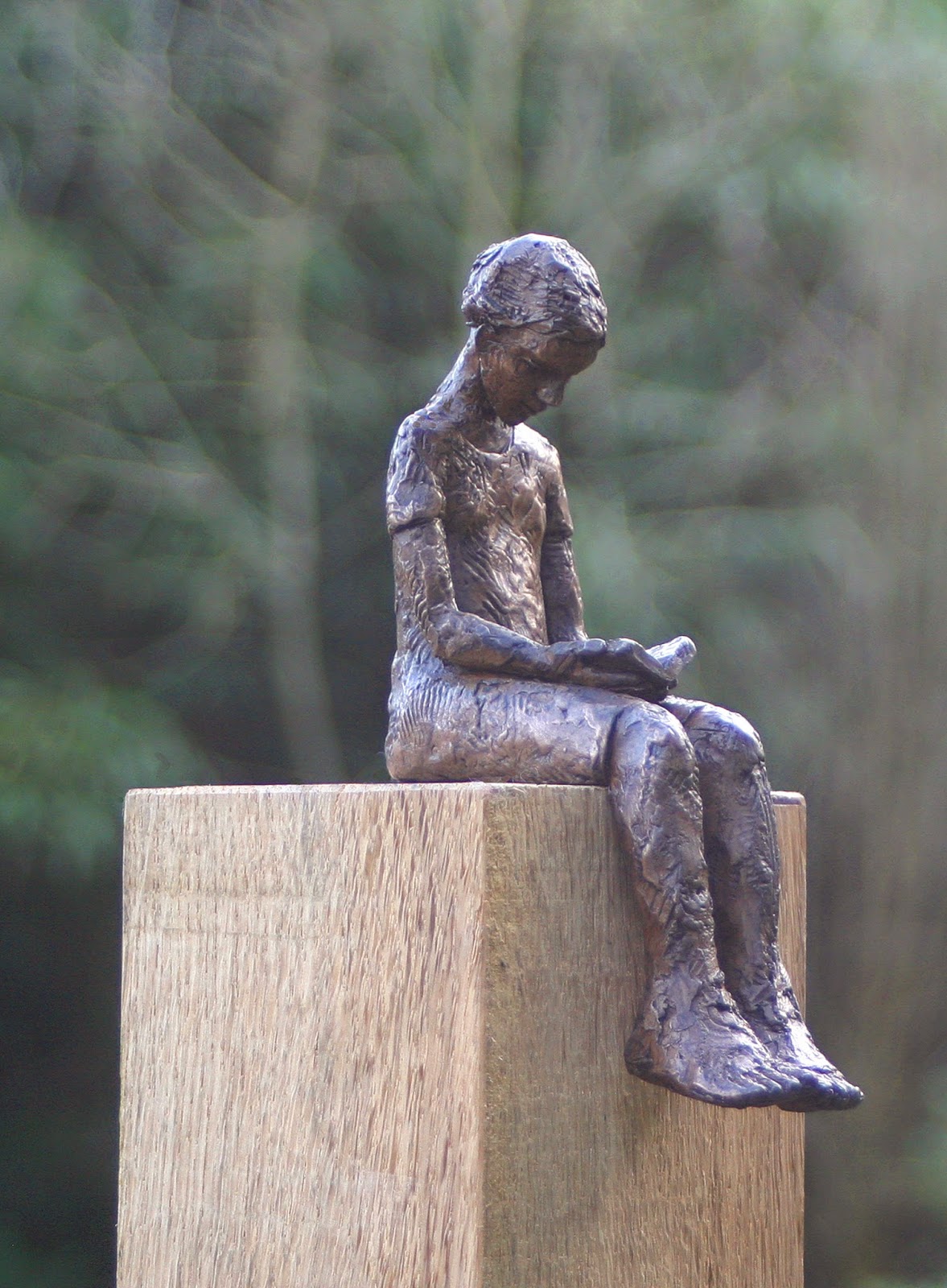 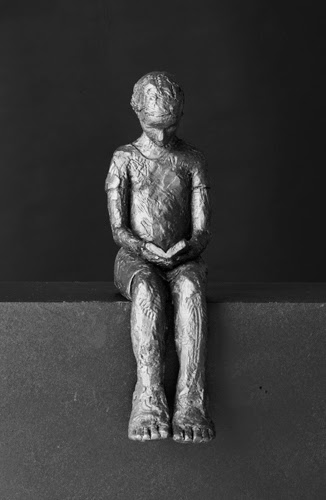 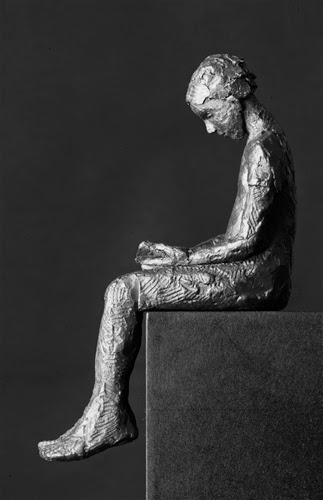 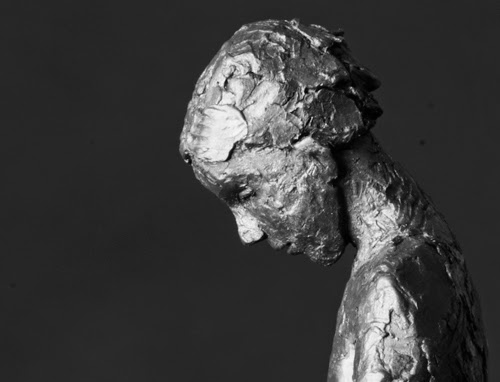 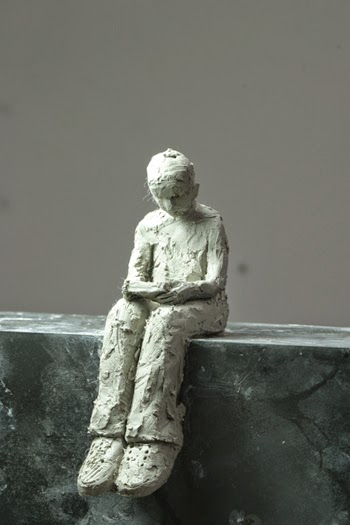 * if you listen to the wonderful clip of her speaking you will hear that she used her own drawings “Another thing I like doing with my poems is to illustrate them: I draw a lot and often a drawing will suggest a poem – it is often that way about. “– See more at: http://www.poetryarchive.org/poem/not-waving-drowning#sthash.l7PCBO2k.dpuf
**JOHN TERRY is interested in industrial archeology, bridges, and sunken wrecks. He believes that life consists of oddly-shaped pieces of rusty metal and sees poetry as an attempt to get all the rivet-holes to line up. He’s won two slams, four open poetry competitions and has been published in a number of otherwise respectable magazines including Acumen, Magma, and Smith’s Knoll. His narrative poem Insecurity Reportis published by Driftwood and his collection Building Wings by City Chameleon.

Press Release
An exhibition of new work made in and inspired by 6 months in Barcelona.
Carol’s work has often traveled the globe. Four life-size bronzes were recently installed in Barbados; her work is collected in Hong Kong and Singapore, as well as the United States and Canada. Closer to home, she shows in Stockholm and Frankfurt, and has had solo shows in The Netherlands, France, Marbella, Athens and Zurich. Carol spent some time painting in Lagrasse, France in 2011 but never before has she taken herself off for 6 months solely to look and work.
“Although you take yourself with you, you leave a lot of your history behind, there is a freedom to that.”
Returning home she brings back with her some of the freedom that she found there in this new and unique body of work.
“These are the sculptures of my imagination, set free by Catalonia.”
After an incredible year of exhibitions the work now comes home to the studio. There is something special about an open studio, this is her home, this is where the work moves on, where thoughts, not just finished works, are laid open to see. She comes back to Bristol to her 22 years of sculpting history, stories from past works swirl around, there is an identity and a grounding to that but distance can bring clarity.
“Like a leather glove holds the memory of a particular hand, I fit snuggly and happily back into my history and into the changing seasons of our life here, but wherever I live, I always want to remain a tourist, wide eyed and stumbling”