Outside, in nature, the surroundings make the decisions, the changing light, the ability to capture or respond to something, the fact that you bum has gone numb from sitting awkwardly for too long.
Ultimately though nature takes hold of you, wraps you up in the comfort of it’s magnitude. Everything seems right. Its an intuitive response, its as if your brain is allowed to switch off and you are resting in a duvet of duck down. Yes you curse yourself for your lack of talent and wonder what you are doing but the overwhelming experience is one of love and respect for nature and for light.

Tamar 1, from upper bank
In the studio the work is ideas based, it comes more from the head, often from the gut, always brutally honest, but it’s always coming from you, inside. There is no comfort, no support it’s just you on your own, all the time. When I am tired I complain about my business, that it’s always up to me, the accounts, pr, deliveries etc but it is my business, my work so who else is going to do it for me! But I think this may be the route of my complaint. The work draws it all from me, if nature stepped in it wouldn’t all be up to me, I would have the support, the company. 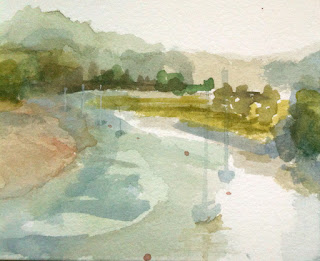 I hardly remember anything from being young but I do remember my Grandfather explaining the ecosystem to me beside a lake in Norfolk, starting from the bugs in the mud. He was a farmer and nature came first. I always think that I want to be a farmer but it may be more about a respect for nature.

Tamar 2It may not look like these watercolors fit with the bulk of my work but I can see that they are coming from the same place. Tidying up the studio today I found lots of leaves I had been trying to incorporate into my work but I think this is a more humble approach. To respect and awe at nature is a more modest way than to create from your head, being by the river it seemed somehow arrogant that you think you could think of something better.

Tamar 3 – drawn firstThe sculpture below of the girl holding the Acorn was an attempt at representing a respect for the natural world and human nature, whether they are the same thing I need to do more thinking about. She holds an acorn cup, empty. It is bright gold inside the cup. The empty acorn cup is symbolic for my respect for nature. Literally, the seed of the tree and the caring cup. But also about our overwhelming desire to procreate, to carry on as each species does, above all else, as this surely is the point of life. It is human nature.  I try to express my ideas in this way but many people see things differently, see what they want to see but I don’t mind that at all. What I am thinking now is, is it better art? 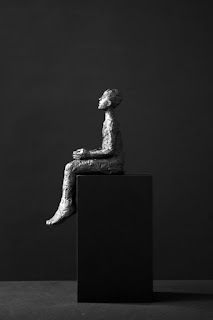 It’s the simplicity of responding directly to nature that I find comforting, restful, inspiring, direct and surprising, in a way that it was as if you were not present. Is that comfort too apparent in the work to make it ‘good’. Is painting from life just glorified copying?

I recently tried not to cry in front of a Rembrandt painting, I felt the same sitting in front of the changing light on the river. The light was just getting better and better, the birds song more clear, more echoey as the evening stillness crept over. The lime green in the distance that had been dotted with white spots of sheep whose voices had earlier carried up the valley was turning pinky orange. Now the sound in the distance was a pigeons lulling call. At 8.45 a green bottomed boat with a red sail that could see the last of the evening sun sailed silently up the opposite bank of the estuary, about turned and went back towards the sea, the beauty of it made me feel insane. 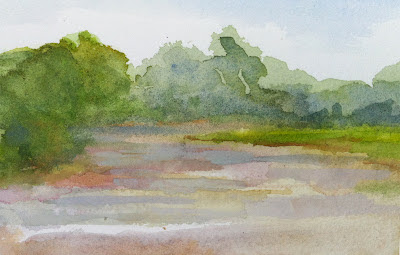 I could not start another because I was being bitten and I was too hungry and tired but I could not leave either. I took endless photos trying to capture some of it to take home but looking at the images I think it will be difficult to capture that feeling again enough to create a full oil, there is no depth no atmosphere to work from. Its amazing what your eyes see that a camera cant translate, I am hoping though having done the watercolours that some of it will come back when I make the painting. 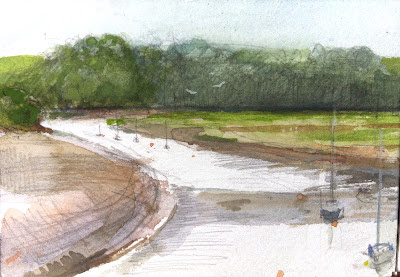 I only used watercolours because that’s what I grabbed when leaving the studio, not thinking seriously that I would do much apart from draw and take photos but straight away I found I needed the colour to describe it. Drawing was not enough, the trees and the different colours I just could not explain with pencil. I have not used watercolour for, it must be over ten years, so it was frustrating at first because I wanted the oils but using water seemed to make sense there. I thought I was struggling all the time, they are no masterpieces but I was really pleased with the colours, especially the last one.

Tamar 4
I know this is how people work, they sketch and take photos in situe and then work them up in the studio but for me the pleasure is being there, to hear the water moving and then the birds flopping about in low tide and bumble bee floating past or the distant engine pooteling out to its mooring. 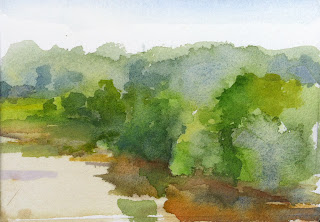 Looking out of the window in the morning the river had gone, just white, the dense oak tree was the only suggestion of there being something out there. I went down in the silence for a last look, the river was full. I couldn’t sense whether the tide, like the mist was moving silently or the expanse of water was like me, resting, hanging, waiting until the next rush out.