I have always felt insecure about painting from memory tainted by imagination, the picture of Graham and I on the hill was done from a feeling, from memory of colour and space. If I had the courage and the talent to do more I would as its something else, a path to being a painter possibly. I like to stick to reality as even that gets pretty intense when you start to let colour in.
http://sculptorinbarcelona.blogspot.co.uk/2013/05/volcano.html 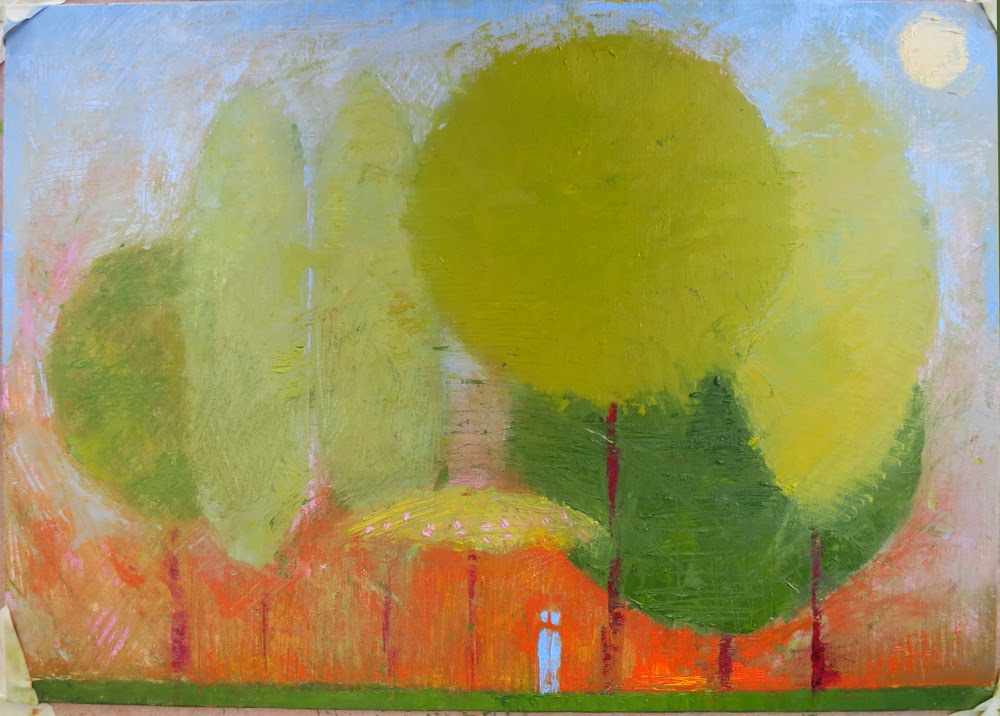 It was painted in Barcelona  about the time of doing the ‘Imaginary Sculpture’ painting, I am going to keep at as my memory of our trips up the hill after work, a couple of tinies and some crisps and we would sit and stare at the light changing colour. The disk in the sky is the moon.  I wrote in my sketchbook then

“we are up north now, and Graham thinks too suburban which is true, it does feel a long way from ‘town’, it’s next to Sant Pau and Sagrada Familia of which both we can see from the terrace. The terrace is why we are here, it was imperative actually on our search, while its interesting seeing the non touristy area I think we could have lived without the terrace and kept the park and the promenading*. But as I have said before the grass is not always greener but it is different and different is good sometimes.

Being here makes me appreciate where we were but it also has it’s advantages. Round the back of Sant Pau is park guinardo and I am sitting near the top in evening sun with a warm breeze filtering up through pine, apart from the hub of the city below and the expanse of ocean just beyond it you could be deep in the country and after a day of painting in the attico it feels amazing to be up here.

I feel slightly cautious up here on my open but at this time of night its mostly older people taking their promenade, they just must be a bit fitter up here as its a hell of a hill. There are flats at the bottom and to get to those there is a series of escalators and lifts. Imagine taking an escalator up park street. If park street was here it would have one. Molly’s not allowed on the escalator ( although on monjiuc we did resort to putting our bikes on them, Mid day mad english people biking up the other hill in Barcelona, intact we often find ourselves up a hill**)

I am sitting by the water spout and dogs come and wait by the tap for their owners to press the nozzle. Molly’s not really got to grips with drinking from a tap, I don’t think she correlates drinking with cooling down so her panting and odd wining is louder than the ambulances and city down below. She is wining occasionally as sitting down on walks is not really appropriate.

At the crown of park guinardo is an old settlement and you can see north, south, east and west. Its like another part of Spain altogether, a little village. To me it feels quite warm, it’s actually really comfortable and at 7pm it’s finally cool enough to sit in the sun, but I have seen 3 joggers go past in the time it has taken to write this. I think its time for a beer!

Went to the bar with the terrace and view and watch the city turn from yellow to orange, to pink, to pinky blue, to night.”***

* The attic was painted green and orange and red, it was hot and intense and away from the tourist areas which gave me solitude and maybe while not comfortable, it gave me the space away from the shared studio to experiment. It was further to bike to the studio and for Graham to come and walk Molly at lunchtime so the practicalities dictated that I stayed in the flat and gave me a chance to paint instead.  It provided the kind of atmosphere that is potentially perfect, not to comfortable ( i.e. herefordshire is just too nice, its wild and it may work later but its too ‘known’ too content at the moment ) the Bristol studio is too busy, too much business and too many visitors ( although it does have doors!? ) this was the perfect type of solitude to work, not something I would want to replicate long term but to dip into oneself further now and again to see what comes out is needed. You need the valleys to be able to see from the mountain.

** smile to myself as now we live on one in England

*** Graham arrives hot and panting up the hill on his bicycle at some point within that change of light, we drink cold lager and the owner is enthusiastic and we order too many plates of little fried fish and calamari.