Press Release
An exhibition of new work made in and inspired by 6 months in Barcelona.
Carol’s work has often traveled the globe. Four life-size bronzes were recently installed in Barbados; her work is collected in Hong Kong and Singapore, as well as the United States and Canada. Closer to home, she shows in Stockholm and Frankfurt, and has had solo shows in The Netherlands, France, Marbella, Athens and Zurich. Carol spent some time painting in Lagrasse, France in 2011 but never before has she taken herself off for 6 months solely to look and work.
“Although you take yourself with you, you leave a lot of your history behind, there is a freedom to that.”
Returning home she brings back with her some of the freedom that she found there in this new and unique body of work.
“These are the sculptures of my imagination, set free by Catalonia.”
After an incredible year of exhibitions the work now comes home to the studio. There is something special about an open studio, this is her home, this is where the work moves on, where thoughts, not just finished works, are laid open to see. She comes back to Bristol to her 22 years of sculpting history, stories from past works swirl around, there is an identity and a grounding to that but distance can bring clarity.
“Like a leather glove holds the memory of a particular hand, I fit snuggly and happily back into my history and into the changing seasons of our life here, but wherever I live, I always want to remain a tourist, wide eyed and stumbling” 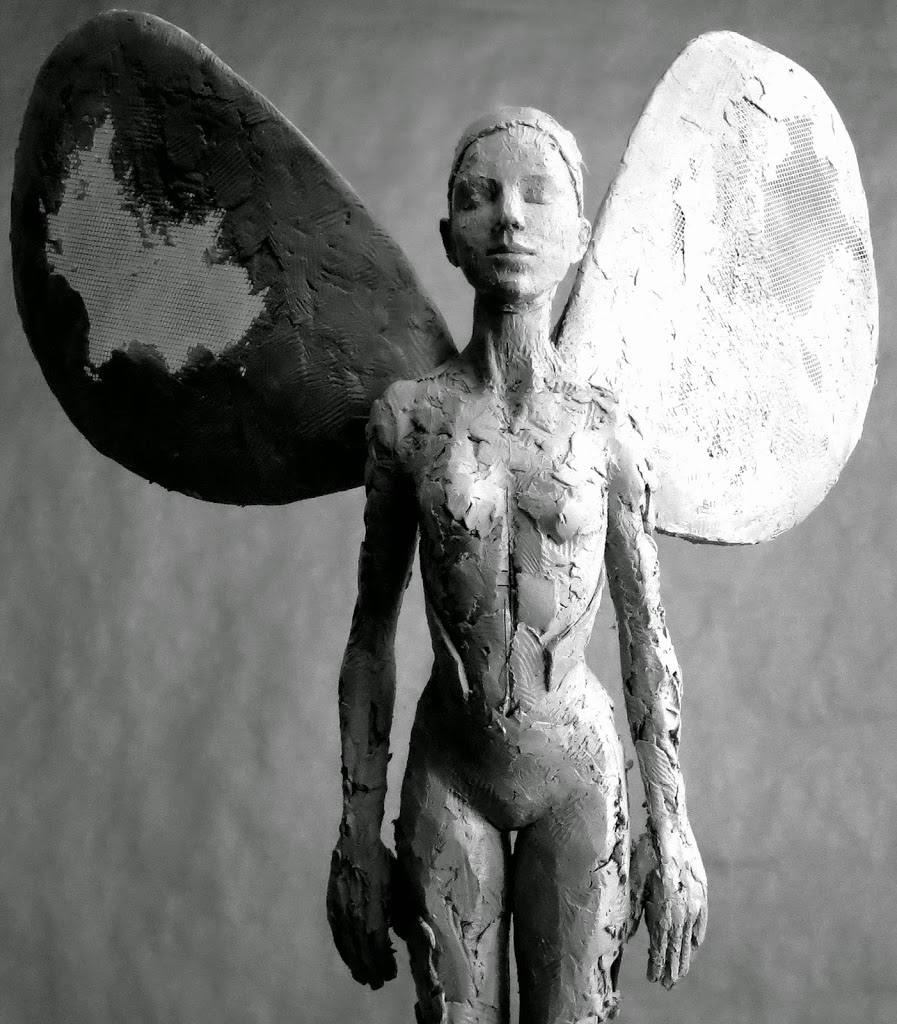 The preparation for the show in Cambridge is nearing completetion and my thoughts turn back to the studio and to words. Met with Judy and Natalia yesterday and discussed our ‘lit night’ the spark of which was the story Judy wrote from an open studio in 2011.

Draughts
The hot afternoon sun is making Chloe drowsy. She blinks, focusing her eyes on the path of a bumblebee drifting from one clover bloom to another. The scent of honeysuckle and chlorine mingles in the air. A faint trickle of sweat slowly wriggles its way from her scalp to the space between her shoulder blades. Her book is still lying on the other side of the lawn in the shade her twin cousins dragged her from when they cast her in the role of umpire.The game of draughts is the third challenge of the day, following a venomous tennis match, won by Amandine, and a swimming race won by Blake. She can see the pool water drying on their bronzed, over-privileged limbs and remembers something her mother once said, about how, the higher up society you go, the thinner the veneer of civilisation, like oxygen on a mountain peak, stretched brittle and insubstantial over the bloodlust.“You’re cheating!” Amandine’s voice rings out. “Chloe, he’s cheating! He put it in his mouth!”Chloe sighs and rouses herself. “Blake, is it true? Open your mouth.”Obligingly he does so, sticking out his tongue, the disk balanced on it like a rosy indigestion tablet. His eyes are laughing as he plucks the draught piece between finger and thumb, dropping it onto the board like something disdainful – he knows full well that his sister won’t touch it now it’s tainted with his spittle.“Game to Amandine,” Chloe decides, and the cousins erupt into shrieks of glee and outrage.Next on the agenda is rhetoric, and Chloe feels her skin tighten with dread, imaging the barbed words waiting to be unfurled and flung.

Author bio: Judy Darley is a travel journalist and fiction writer. Previously she’s had fiction published by literary magazines and anthologies including The View From Here, Gemini Magazine, ‘Crab Lines from the Pier’ and ‘The Love of Looking’. Her travel writing has appeared in magazines, on websites and in ‘1001 Retreats to Make Before You Die’, published by Penguin. Recent journeys include visits to Slavonia, Iona and Tunisia. She tweets at http://twitter.com/EssentialWriter