Went to the studio today and had an argument with some garlic. Not a complete fall out, but a bicker, a long bicker and I leave a bit tired and grumpy as what was going to be the delicate, exquisite subtulties of whites and purples is not apparent. Now I know why I started with an egg last time. Not sure how my huge painting of the arc will pan out if a bit of garlic is an obsticle.

It wasnt very nice garlic anyway, ( now I am bitching ) I bought four bulbs from a guy on the street corner for one euro, thought it would be poignant to draw from one of the people selling on the street but tomorrow I think I will go and buy some expensive flowers. 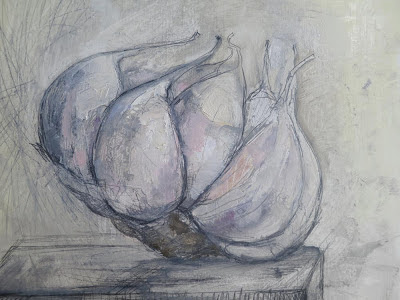 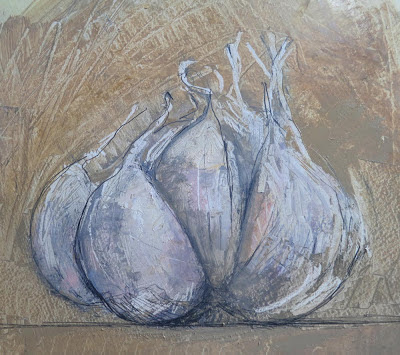 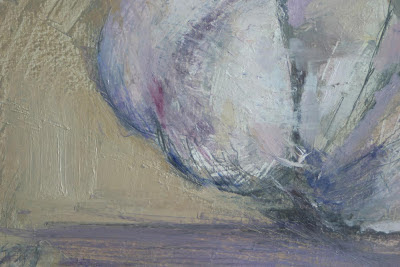 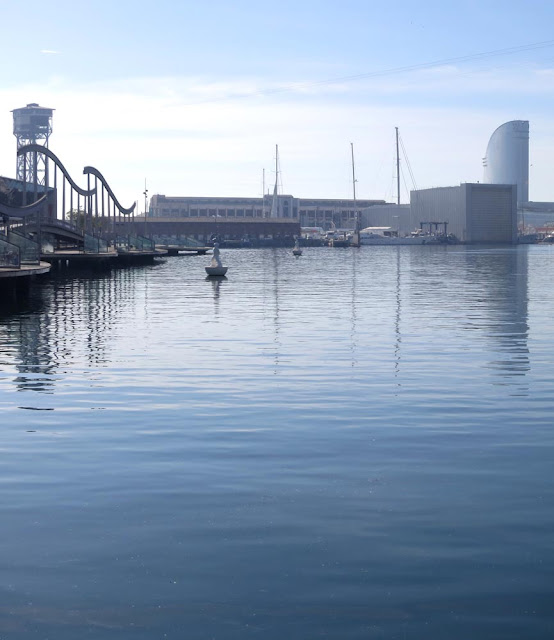 finish the argument with the garlic the next day 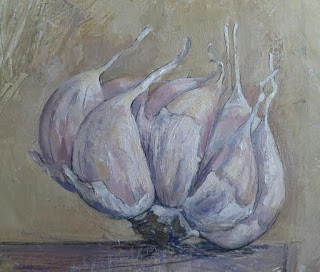 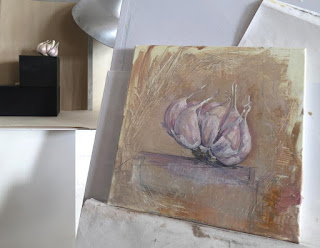 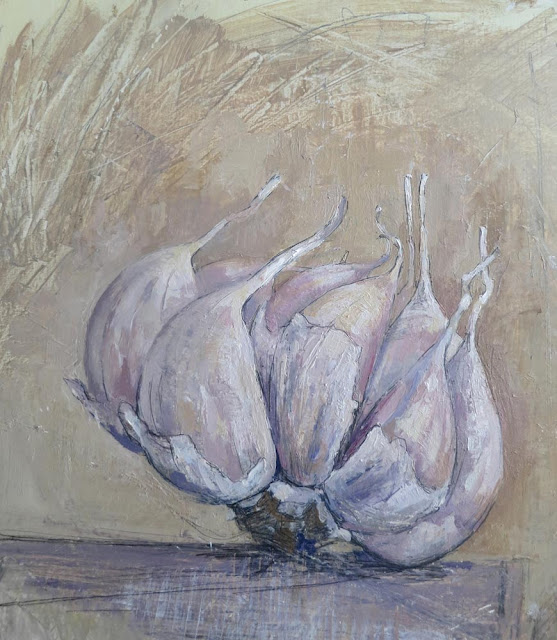 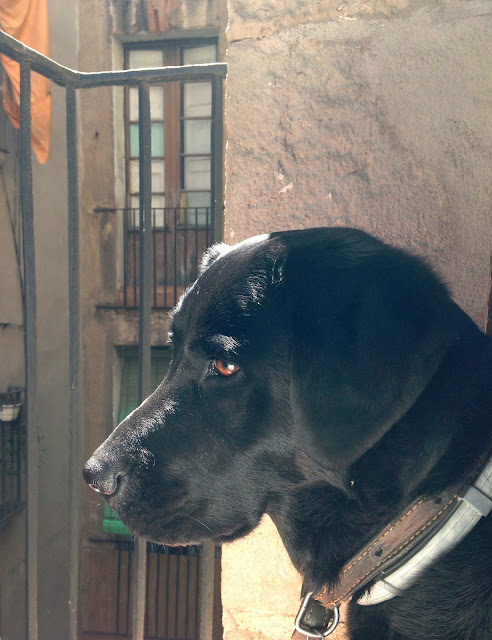 1.There is a building gone opposite us so there is a big space where the light gets into the street.2. Molly looking at the people below, she is not so sure about it.3. Our front door4. View from the sitting room5. The front door from above 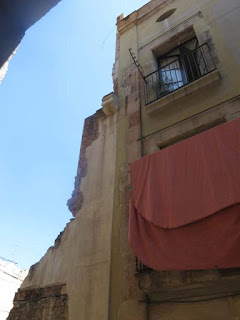 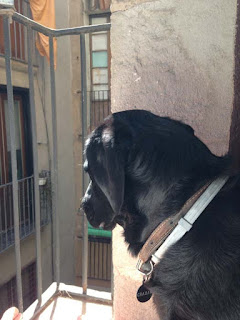 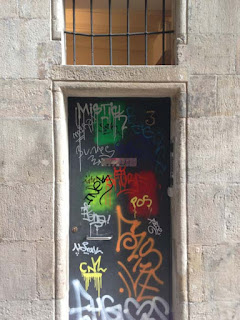 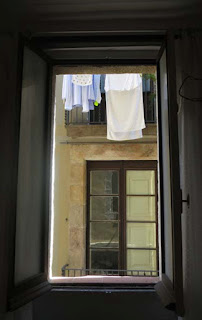 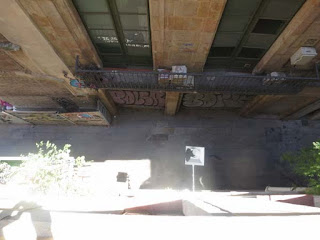 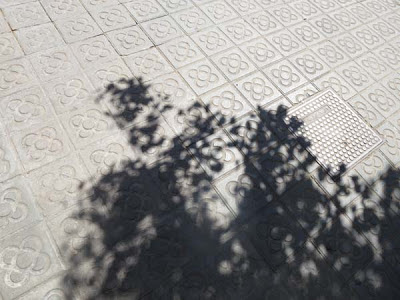 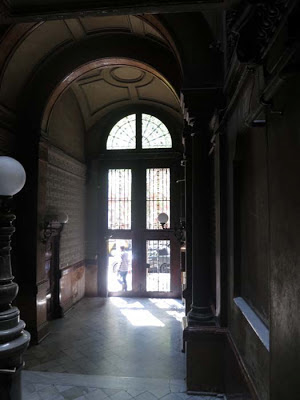 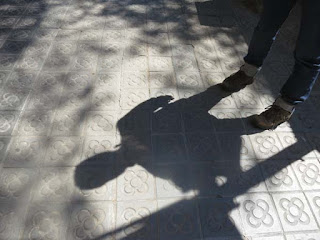 Grahams patiently waiting for me to finish photographing the floor! 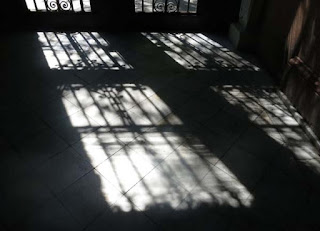 Had a both brilliant and weird evening at the ANTIC TEATRE last night, having a beer in the gorgeous beer garden of which the chatter you can hear coming down the street, you go through the wall and up the stairs and you are into an oasis of beautiful people drinking and talking in the classic rustic/unkempt (sometimes verging into dirty) charm of a look that they seem to pull off here. The French also pull this off but a bit cleaner and more feminine?
Two levels, a big fig tree in the middle, a ginger cat, railings, stone terraces, enveloped by buildings that echo the atmosphere back into the space lit in part by fairy lights and part by the windows that look onto it.
Waiting by the bar to go in, I test Graham’s Spanish (useful theater vocab!) as the program is in Catalan, Spanish and English and in the quiet (or dark horse!) way that he is he pretty much gets it all right! Not being able to practice his Spanish out of class (certainly not on me) I don’t know that he is quietly, 2 hours a day, acquiring a hidden talent! bien hecho chico! (pathetically I had to do google translate for that…..again!)
Anyway the performance was in a black rectangle of a space with a small audience and one light spotting a cello playing and a figure in the corner in white rags by the look of it. The figure breathed and moved and soon the figure of a man became clear, through the performance he came forward and seem to grow in size disproportionally within the space he was using, close up he was massive.
There was a slight horrific moment as I had a coughing fit as he was on all fours staring, grimacing at me like a heavy jowly rockwieler, his sweat and white macup only making the scene more surreal, and then he moved slowly completely silently into the audience towards a light at the back (coughfing fit subsided now through shear terror ) he stops three seats in, at us, uses Grahams head as a steading devise and moves his huge, sweaty, white vested fat but muscly bulk around weirdly rocking the empty set of seats behind us.
His interest in Grahams head and the empty seats subside and he, what can only be described as a dance, continues. So he was a clown, a very big clown moving his large arms and long feet and huge belly as if he were a ballerina, but in his own very sad and beautiful way.
Slightly bewildered or traumatized ( in part by horrifically embarrassing coughing fit) we waddle off down the streets to our newly found favorite square, Placa de Sant Pere, eat in a french bar en aparte a couple of hearty salads and discuss over a bottle of red, future plans that as swiftly and lightly as our large white clown friend moved around the black rectangle of space drift from permanently spending half our lives here, buying an industrial space and me learning Spanish, briefly to Rome and then off more weirdly for me (as I always insisted it would never be) to Berlin.